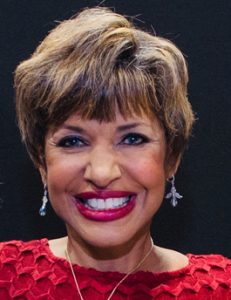 For more than 25 years, Sally-Ann Roberts co-anchored with Eric Paulsen the popular Eyewitness Morning News on WWL-TV New Orleans, and made the newscast one of the highest-rated morning newscasts in the country. During her 40 year career at WWL-TV, Roberts has anchored nearly every newscast on Channel 4, from 5 a.m. to 10 p.m. and weekends.  Announcing her retirement in February 2018, she is remembered as being a beacon of light and hope to her viewers during the city’s most difficult times.

As an Air Force “brat” Sally-Ann traveled extensively as a child. She was born in Chandler, Arizona to Colonel Lawrence Roberts of the legendary Tuskegee Airmen and Lucimarian Roberts.  Sally-Ann spent her childhood on the move living in many cities throughout the country including abroad in Izmir Turkey. When Sally-Ann was in high school her family settled in Biloxi, Mississippi at Keesler Air Force Base. She graduated from Biloxi High School and then attended the University of Southern Mississippi where she received both her Bachelor’s and Master’s degrees.

Sally-Ann began her tenure at WWL-TV on March 31, 1977.  As a City Hall reporter, she covered city government during the administrations of Moon Landrieu, Ernest Morial, and Sidney Barthelemy.  In 1998 she was part of the reporting team that earned WWL-TV the coveted Edward R. Murrow Award for late-breaking news.

Certainly her most cherished accomplishment occurred in the fall of 2012 when she donated her bone marrow to her sister Robin Roberts who was suffering from a life-threatening disease called MDS.  Since then both sisters have traveled advocating for donors to be added to the National Bone Marrow registry by speaking at conferences ranging from the National Conference of Be The Match in Minneapolis, MN to the STEM Cell Conference at The Vatican in Rome.  They both received recognition in 2013 from the New Orleans Sports Hall of Fame as well as Coachart in Los Angeles, CA.

In 2012 the NAACP National Health Committee presented Sally-Ann with the Unsung Hero award.  That same year she was also recognized by the National Urban league with the Women of Power Award.  Among her most prized recognitions are the 2014 Louisiana Association of Broadcasters Lifetime Achievement Award and the Press Club of New Orleans 2015 Lifetime Achievement Award.

In 1994 Sally-Ann co-founded with Cathy Harris the mentorship organization, Each One Save One. Over the years, the non-profit organization has recruited, screened, trained and placed hundreds of mentors in schools and organizations across the metro area.

For nearly two decades, Sally-Ann hosted the teen talk show, “Our Generation”. Young people who appeared on that program are now working around the country as journalists, educators, engineers and other fine professions. Sally-Ann is happy to say she knew them “when”.

Aside from her career in the media, Sally-Ann is often in high demand as a motivational speaker across the country.  Her audiences range from faith-based organizations to the corporate world including VITAS (National Black Nursing Association).

Sally-Ann is the author of three books, “Going Live…An Anchorwoman Reports Good News”, the novel “Angelvision” and the very inspirational “Your Power Is On” with the photography done by her Co-anchor Eric Paulsen. All three books are published by Pelican Press. After being a widow for five years, Sally-Ann remarried in 2007. She is the proud mother of three children and grandmother of five.  Asked to what she attributes any success she may have achieved, Sally-Ann gives all honor, glory and praise to God.