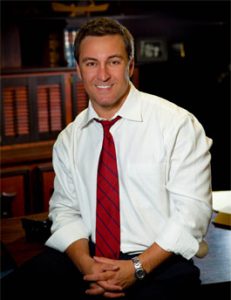 Norbért “Norby” Chabert was born and raised on the bayou. The son of Leonard J. Chabert of Cut Off and Viona Lapeyrouse of Chauvin, Chabert grew up on the banks of Bayou Petite Caillou in the community of Lil Caillou.

Chabert received a Bachelor of Arts in government from Nicholls State University. After graduation, he began a successful governmental relations career. Over the years, he has served as an aide and advisor to both federal, state and local republican and democrat officials across Louisiana.

Following the vicious storms of 2005 that saw the family home he was born and raised in flooded with over three feet of water, Chabert left behind political consulting to be closer to friends and family and aid in their recovery. He formed Chabert Development LLC, a Chauvin-based land and consulting company, and he later joined the president’s administration at his alma mater as associate director of marketing and development.

In 2009, Chabert left a job he loved at Nicholls State University to campaign full time for a special election to fill the vacant state senate seat once held full time by his father and his brother, Marty J. Chabert. That year, the voters of Senate District 20 elected Chabert as their voice in Baton Rouge. On September 8, 2011, he was re-elected without opposition to serve a full term in the Louisiana State Senate.

Chabert has been a lifelong south Louisiana sportsman. The only thing he loves more than cooking and playing cards with the gang at the camp is the time he spends on Grand Isle with his family.

Chabert resides in “Old Houma” near Maple Avenue Park, where he hears the bells of St. Francis every day. Chabert serves as a member of the Houma Rotary Club, the Krewe of Hercules, the Krewe of Terreanians, K.C. Council 5013, and The Maple Street Park Association. He is a board member on the Nicholls State University Colonel Athletic Association, the Friends of Sout Terrebonne High School and the Houma-Terrebonne Chamber of Commerce.