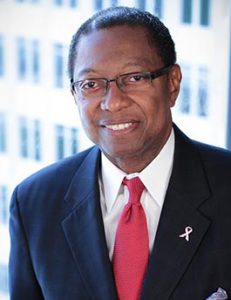 Mayor-President Melvin “Kip” Holden was overwhelmingly re-elected to a second term of office on October 4, 2008, carrying every precinct in East Baton Rouge Parish for the first time in history. His first term in office was marked by unprecedented growth and progress for the city-parish, including the City of Baton Rouge earning its highest national rankings for job productivity and favorable business climate.

With public safety as a top priority for his administration, Holden presides over a team of first responders — the Baton Rouge Police Department, Baton Rouge Fire Department, EMS and the East Baton Rouge Office of Homeland Security and Emergency Preparedness who have all achieved the highest national rating for professionalism in their respective areas of service.

Mayor Holden’s Green Light Plan, a program of street and road improvements he presented to voters in 2005, saw two projects completed and seven in construction in record time by the end of 2008 with 12 more slated for construction in 2009.

Much of the success of his first term in office can be traced to the foundation laid by a diverse team of over 100 community leaders, citizens and university students Mayor Holden assembled immediately after his election in 2004 to form his Green Light Baton Rouge Citizens Council to help develop the “Framework for Progress,” a planning document which serves as the basis of his administration’s goal to make Baton Rouge America’s next great city.

Prior to 2004, he had a 20-year distinguished career in public service. He was elected Mayor-President by a broad, diverse base of support throughout the parish to become the first African-American Mayor-President in parish history on January 1, 2005.

Upon his inauguration to his first term, he embarked on an ambitious journey to revitalize Downtown Baton Rouge, create an arts and entertainment district and market Baton Rouge to the film industry. He has the city moving on a riverfront master plan and redesigning a Town Square to provide more venues for arts and cultural activities. In 2006, Mayor Holden launched a new Economic Development Initiative for East Baton Rouge Parish that includes a partnership with the Baton Rouge Chamber of Commerce to market the parish, the opening of two Minority Business Opportunity Centers to help small businesses participate in Louisiana’s economic recovery and a micro-loan program and Bankers’ Roundtable to assist small business development.

Recognized nationally for his leadership during the aftermath of Hurricane Katrina, Mayor Holden managed a city-parish that became a place of refuge for over 200,000 evacuees from south Louisiana in less than one week.

At a time when Louisiana was reeling from the devastation of two hurricanes, Mayor Holden took his city’s story to Wall Street and bond rating agencies upgraded bonds for East Baton Rouge Parish based on his administration’s sound management policies, saving the taxpayers millions of dollars in interest.

Throughout his career, Mayor Holden has worked to improve education and has been honored for his accomplishments. As Mayor-President, he has delivered new volunteer programs and technology partnerships for East Baton Rouge Parish public schools, including the largest software donation in East Baton Rouge Parish history, a $307 million grant from UGS that provided 3-D imaging software for classes in math, science and the arts for students from the third grade through high school to help prepare them for the jobs of tomorrow.

With experience on the Metro Council and as a member of the Louisiana House of Representatives and Senate, Mayor Holden has extensive knowledge of East Baton Rouge Parish government.

Born in New Orleans on August 12, 1952, Mayor Holden is married to Lois Stevenson Holden and is the father of five children, Melvin, II; Angela; Monique; Myron and Brian Michael. He is a member of Greater King David Baptist Church.