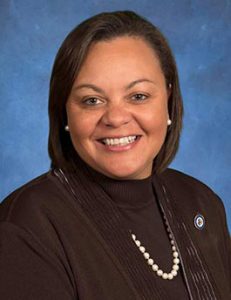 Karen Carter Peterson serves as the state senator for District 5, which encompasses New Orleans and part of Jefferson Parish. She won her Senate seat in January 2010, after a decade of service in the Louisiana House of Representatives. In 2012, became the first woman in Louisiana history to win the chair position of the Louisiana Democratic Party. Senator Peterson currently serves as vice president of the Association of Democratic Party Chairs.

During her time in the Louisiana House of Representatives, Peterson established herself as a powerful asset. She served on the House Appropriations and Governmental Affairs committees, the Joint Legislative Committee on the budget, and finally as house speaker pro tempore, the second highest position in the House. She was also the first woman to chair the House Insurance Committee. Currently, Peterson serves as chair of the Senate Select Committee on Women and Children and immediate past chair of the Legislative Women’s Caucus Foundation. She is also a member of the Judiciary B and the Local and Municipal Affairs committees.

Peterson earned a degree in international business and marketing from Howard University School of Business and a Juris doctorate from Tulane University Law School, where she was afforded the opportunity to attend both Boston College Law School and the University of Virginia School of Law as a visiting student.

Peterson has participated in many distinguished professional and civic activities. She has been a board member and volunteer for a wide variety of organizations. Beginning at the age of 18 through the year 2012, she served as a delegate to Democratic National Conventions. Over the years, many organizations and publications have recognized Peterson with service-based honors, including the Legislator of the Year Award from the Alliance for Good Government in 2000, 2004 and 2012. Peterson has also been honored with the John F. Kennedy Library Foundation and the Institute of Politics at the John F. Kennedy School of Government’s New Frontier Award and the Aspen Institute-Rodel Fellowship in Public Service.